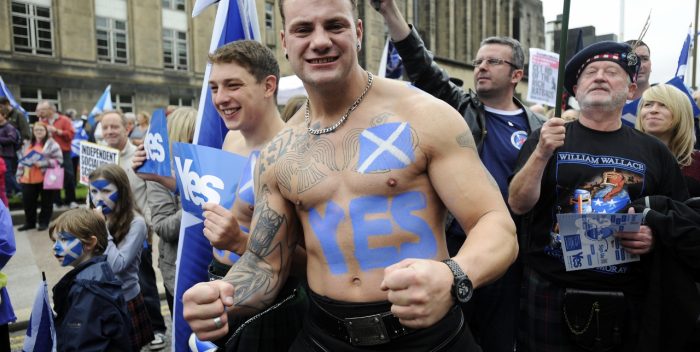 In September of last year, two far-right movements were banned in Scotland. These organisations, ‘Scottish Dawn’ and ‘NS131’ were proscribed as terrorist organisations by the Home Office, and brought the subject of right-wing extremism in Scotland back into the limelight. As a general rule, Scotland does not possess a far-right tradition in the same spirit as other parts of Europe. While the media may run panicked headlines about the rise of this or that anti-immigration, pro-nationalist party in Austria or Poland, the far-right’s performance in Scotland has been, to put it generously, muted. Its election performance is negligible, with only the National Front gaining a single community council seat in 2015. Their percentages of the vote hover around zero. They have not developed a formula that chimes with contemporary Scottish political tradition. After all, for any extremist group to succeed, it needs a group to oppose. The academic Roger Eatwell has termed this “an effective discourse of exclusion”. There are two of these in Scotland, and they have been more or less monopolised by home-grown organisations for the duration of the nation’s modern political history. The first is the most obvious: opposition to Westminster (or England in general), while the second is less prominent now yet still has a part to play: anti-Catholic sentiment, rooted in pro-union Protestant activism. These Scottish constructions of an “other”, the separatist and the sectarian, are long-established, and largely at odds. They have diversified the market for extremism and bigotry and have made it difficult for anti-immigrant, England-based movements such as the BNP (British National Party) or EDL (English Defence League) to gain a foothold. This is not an absolute, but until some very fundamental things change, I think prejudice in Scotland will develop apart.

The far-right does not do well north of the border, but this is not because Scots are fundamentally more tolerant. Every country has a demographic which is ready to march in step and engage in street violence against a group or institution they deem an enemy. However, this impulse has manifested itself very differently in Scotland as opposed to the rest of the UK. Historically the reviled immigrant group in Scotland has been the Irish, the migration of whom began in earnest after the Famine of the mid-1800s. Anti-Catholicism has been fostered by the historical trauma of the Wars of the Three Kingdoms (1639-1651), the Jacobite risings (1688-1746) and the Northern Irish Troubles (1968–1998). The failure of the Far Right to capitalise on this is only too obvious. The original far-right party in the UK, the British Union of Fascists, failed to adopt policies to local idiosyncrasies. The BUF was not sectarian, and indeed, its leader Oswald Mosely was supportive of the IRA. This did much to alienate the section of the Scottish population which could have otherwise provided support. Extremist groups did exist, such as the Scottish Democratic Fascist Party and Protestant Action, both of which engaged in street-level activity in the fascist style but with a sectarian bent. Today, it is organisations like the Orange Order which monopolise this prejudice, particularly in Edinburgh and Glasgow. Communal memories of violence and the long tradition of inflammatory flag-waving and songs in the Glasgow Old Firm football derby ensure that sectarianism will take precedence over xenophobia. Furthermore, when one considers the level of immigration to Scotland compared to England it’s not difficult to see that anti-immigrant parties would fare worse. Around 14.2% of the English population and 37% of London population is foreign-born. Compare this to Scotland’s population, of which only 7.2% was not born in the UK. The lack of immigrant enclaves in Scottish cities on the scale of Bradford or Luton makes it difficult to construct an exclusionist discourse. The University of Oxford’s Migration Observatory has found that, in the run-up to the Independence Referendum in Scotland, immigration was not very important for Scots.

This is by far the more well-known and socially acceptable variant of Scottish exclusionism, and probably the most multi-faceted. On average it is manifested in a very general, low-level antipathy towards “the English”, particularly at sporting events. However, at the respectable political level it is represented largely by the Scottish Nationalist Party, which rather than being anti-English, takes an anti-Westminster, anti-austerity stance, blended with Scottish patriotism. The nationalist movement seeks legal separation from the UK by repealing the 1707 Act of Union, and the referenda of 1979 and 2014 were key manifestations of this impulse.  However, Scottish separatism is not only of the inclusive, civic nationalist variety. On the fringes of the movement there is extremism, both far-left and far-right. During the 1970s and 80s, the largely-forgotten “Tartan Terrorists”, splinter-groups who took inspiration from left-wing insurgencies in the developing world, sent letter bombs and made anthrax attacks on politicians and royalty. To the right of the spectrum, organisations such as the aforementioned Scottish Dawn and Sìol nan Gàidheal have espoused a blood-and-soil variety of Scottish nationalism, with the latter seeking to “support the revival of the Folkic traditions of Scotland…and…liberate the Scottish people from the worst excesses of English/British Cultural Imperialism”. Even outside of any organised group, prejudice rears its head. During the lead-up to the 2014 referendum, unionist politicians were hounded by extreme nationalists and words like “traitor” and “quisling” were common parlance.

However, this prejudice remains more on an individual level, rather than finding an expression in a large-scale movement. It could be argued that the SNP fulfils this discourse of exclusion, through the party’s campaign for legal separation. It could also be argued that, unlike in Ireland for example, the same level of historic oppression against the majority of the Scottish population does not exist. Indeed, the majority of oppression carried out has been by other Scots, particularly by the Scots-speaking, largely protestant Lowlanders against the Gaelic-speaking, Catholic or Episcopalian Highlanders. This is a complex process which predates the Act of Union and ties into the sectarianism mentioned above. This furthermore ensures that, in the business of constructing an “other” anti-English/British militancy on the same scale as Northern Ireland is almost impossible. Scottish and English institutions and culture have been intertwined in various, complex ways for the past 300 years, particularly through the mutual benefits of Empire and shared Protestant faith. The fact that Scotland was able to retain its own education, church and banking system after 1707 have gone a long way to create a civil relationship. It is therefore difficult to imagine any large scale movement with the same views on the English as a party like the BNP has on Asian immigrants.

These two discourses of exclusion are largely incompatible. Those with an anti-Catholic mindset are more likely to be seen waving union jacks and ulster banners at Ibrox stadium, as opposed to saltires. The Orange Order campaigned on behalf of the UK in 2014 while in 2015 former First Minister Alex Salmond, the leading light of the pro-independence campaign, claimed that the majority of Scottish Catholics voted yes. Pro-independence grassroots organisations have drawn links between Scottish nationalism and Irish republicanism. Indeed, David Scott of the anti-sectarian charity Nil by Mouth accused some nationalists in a 2014 edition of the New Statesman of using “dog-whistle” language to appeal to a sectarian base. What does all this signify? I believe it dilutes and divides the potential market of prejudice which organisations like the BNP and EDL can appeal to. Neither of these groups can subscribe to sectarianism, or indeed nationalism, and are thus caught in something of a limbo in Scotland. True, the European-wide identitarian movement has, in the form of Scottish Dawn, tried to co-opt nationalist discourse, but this is in early stages. The right-wing millionare activist Jim Dowson has stated that England is “stuffed” due to her levels of immigration and cultural dilution. He, like Scottish Dawn, wants to rescue Scotland from a corrupt, liberal and globalist elite. But, until the discourse shifts, either through increased immigration or economic deprivation, it is likely that the points of rupture mentioned above will continue to exert a greater influence on forming extremism and prejudice in Scotland.

a Scottish nationalist rally before the 2014 referendum. Source: New Statesman.com.